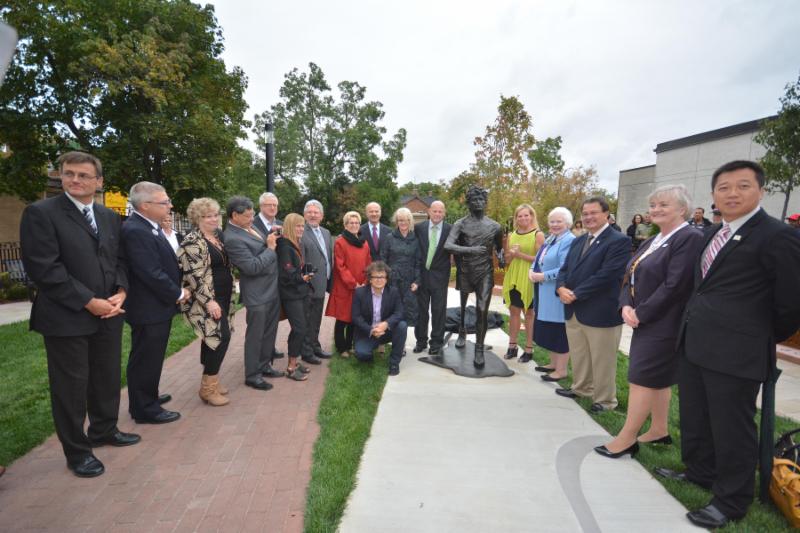 Lieutenant Governor Elizabeth Dowdeswell, Premier Kathleen Wynne and Richmond Hill Mayor Dave Barrow unveiled Richmond Hill’s Tribute to Terry Fox at a community celebration on September 12. The Tribute, a bronze statue of Terry Fox, celebrates his amazing journey of 5,373 kilometres over 143 days in 1980. His route included running north on Yonge Street, past the location of Richmond Hill’s Tribute.
“It is a very proud day for the Town of Richmond Hill to honour Terry Fox, a true Canadian hero and commemorate the 35th anniversary of the Marathon of Hope,” said Mayor Barrow. “Residents set the direction for our Tribute and it is truly spectacular.”
The statue was created by internationally-acclaimed artist Radoslaw Kudlinski in collaboration with Anna Passakas. Kudlinski and Passakas form the art collective Blue Republic. More than 700 residents participated in public consultations which determined that the community wanted a realistic, traditional representation of Terry Fox.
“The sculpture I created shows Terry running his Marathon of Hope, a young athlete, committed to his epic undertaking of raising funds for cancer research despite losing his leg,” said Kudlinski. “His courage and perseverance inspired, and continues to inspire, countless individuals.”
The statue stands in Ransom Park, which was redesigned to honour Terry Fox. The park features a Corten steel wall with the words of Richmond Hill residents in response to the question “What does Terry Fox mean to you?” A second wall displays Terry’s route across Canada during the Marathon of Hope. A metal ribbon winds through the concrete pathway in the park, representing Terry’s planned journey from Newfoundland to British Columbia. The ribbon’s appearance changes part way across the park, symbolizing the end of Terry’s marathon in Thunder Bay.
Fred Fox, Terry Fox’s brother, worked with Richmond Hill staff throughout the development of the Tribute. “I briefly visited Ransom Park, the location of the Richmond Hill Terry Fox Tribute, with my brother and sister, Darrell and Judi, last fall,” said Fox. “I found it interesting to imagine how the park would look a year later, but also what it might have been like for Terry running up Yonge Street through Richmond Hill. He was now heading north out of southern Ontario, a mental milestone of getting closer to home.”
Terry Fox was diagnosed with cancer as a teenager and had his right leg amputated. Wanting to support cancer research, he went on to inspire cancer patients and Canadians alike by running across Canada to raise awareness and funding. His Marathon of Hope began on April 12, 1980 in Newfoundland, and sadly, it ended in Thunder Bay on September 1 because cancer had spread to his lungs. Terry Fox passed away the following year, in 1981. As Terry’s legacy continues through annual Terry Fox Runs and the work of the Terry Fox Foundation, more than $700 million has been raised worldwide for cancer research.
For more on this story click here – https://www.yorkregion.com/news-story/5840037-terry-fox-memorialized-with-statue-in-richmond-hill/