As a member of Heritage Richmond Hill (HRH), I am particularly pleased that Council recently approved the HRH’s recommendations to award $29,483 in Heritage Grants in 2017 for the preservation and restoration of eight privately owned heritage properties. Heritage plays an important role in Richmond Hill as it promotes a sense of identity and celebrates the town’s unique culture. Richmond Hill is committed to preserving its structural heritage to create a more vibrant community for future generations to enjoy. The grants will provide for the restoration and repair of heritage components that are identified in the properties’ designation by-laws. This year’s projects include brick restoration, exterior painting and replacement of roof shingles. Preserving physical features helps to protect the town’s past. To learn more about the Heritage Grant program please click here.
2. Richmond Hill Updates Smoke-Free Outdoor Spaces Policy
To continue to

protect the health of Richmond Hill residents, Council approved banning the use of electronic cigarettes in accordance with the Town’s Smoke-Free Outdoor Spaces Policy. The use of electronic cigarettes will now be included in the policy that was adopted by Council in 2014. It prohibits smoking outside within nine metres of any entrance to a recreation facility, outdoor splash pad, sports field, playground or sports court (basketball, tennis, etc.). This policy complements the Smoke-Free Ontario Act which states it is illegal to smoke on and within 20 metres of all publicly-owned playgrounds, splash pads, sports fields, tennis courts and basketball courts.
3. Tastes of the Hill Provides Cultural Experiences and Funds to the Community

Deputy Mayor, Regional & Local Councillor Vito Spatafora recently reported at Council that $35,000 was raised at this year’s Tastes of the Hill (TOTH) Multicultural Festival in support of Big Brothers Big Sisters of York. This year’s TOTH multicultural festival allowed visitors to experience international cultures through a variety of activities, including live entertainment, a fashion show, contests and a showcase of culture, food and beverages, film, arts and crafts and sports. To date, Tastes of the Hill has raised over half a million dollars for more than 20 local charities.
4. Richmond Hill Receives 10 Communications Awards
Richmond Hill was recognized with 10 communications awards for a wide range of projects, including the Town’s new website that was launched in fall 2016. Richmond Hill received a Gold Marcom Award for the LED StreetLlights project video, Gold Hermes Creative Awards for a Dog License Social Media campaign and the Access Richmond Hill Car Wrap. For the Town’s new website, Richmond Hill received a Gold Hermes Award in the government category, an AVA Digital Award in the government category, an Outstanding Website and a Government Standard of Excellence from WebAward (Web Marketing Association) and a Silver Leaf Award of Excellence from the International Association of Business Communicators (Canada). Richmond Hill also received an Honourable Mention from Hermes Creative Award for a Stormwater Education Board and an Honourable mention from Hermes Creative Award for the website’s homepage.
5. Richmond Hill Recognized For Award-Winning Park Designs 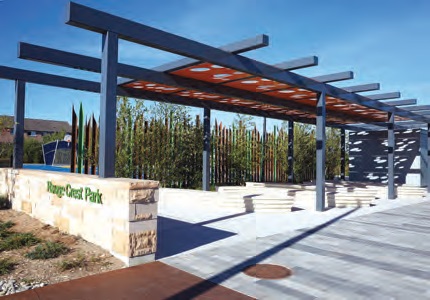 Richmond Hill has been awarded by the Ontario Concrete Industry for Outstanding Architectural Hardscaping at Ward 4’s Rouge Crest Park. The park’s design was inspired and based on patterns found in nature which are interwoven into surface treatments, vertical structures, play areas and site furniture. For example, the ripple pattern on the seating walls, honeycomb pattern on some of the walls and the abstracted pattern of a braided stream in the waterplay area’s cast-in-place concrete pad. Richmond Hill has also been recognized by Parks & Recreation Ontario and Landscape Ontario with Awards of Excellence for Lake Wilcox Promenade.
6. Richmond Hill Council Sets Target Date for Yonge Subway Extension 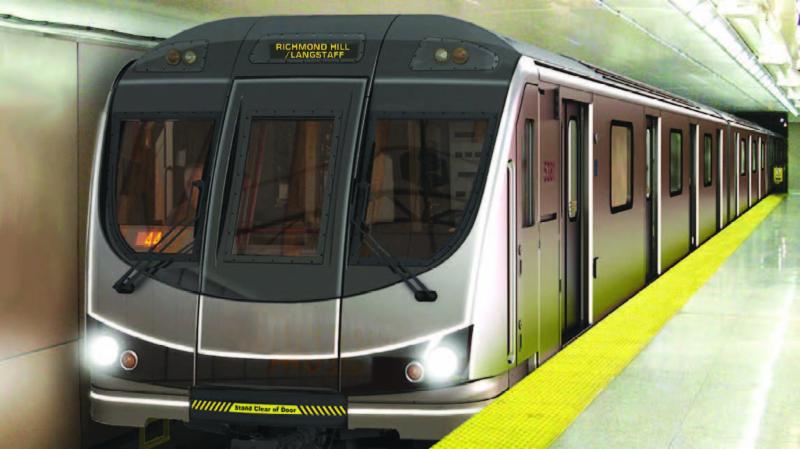 Richmond Hill Council identified the Yonge North Subway Extension as the top transit priority for the Town and continues to advocate that the Yonge Subway extension needs to be a top priority for Metrolinx. As such, Council provided official comments to Metrolinx on the draft 2041 Regional Transportation Plan, including a request for the Yonge Street subway extension to be constructed and operational by no later than 2031. The completion of the Yonge Subway extension is important to realize the Town and Region’s vision for the Richmond Hill Centre as an Urban Growth Centre, and will be a primary point of convergence for the Regional and Rapid Transit network, with substantial demand for the Yonge subway to connect to Downtown Toronto, and other key destinations throughout the subway network. Council has also requested that Metrolinx consider the addition of a grade separation on Elgin Mills Road at the CN Rail line, the addition of a GO Station or Mobility Hub at Yonge/16th Avenue, and advancing Regional Express Rail on the Richmond Hill GO Line as part of the 2041 Regional Transportation Plan.
7. National Public Works Week Raised $2000 for Hill House Hospice 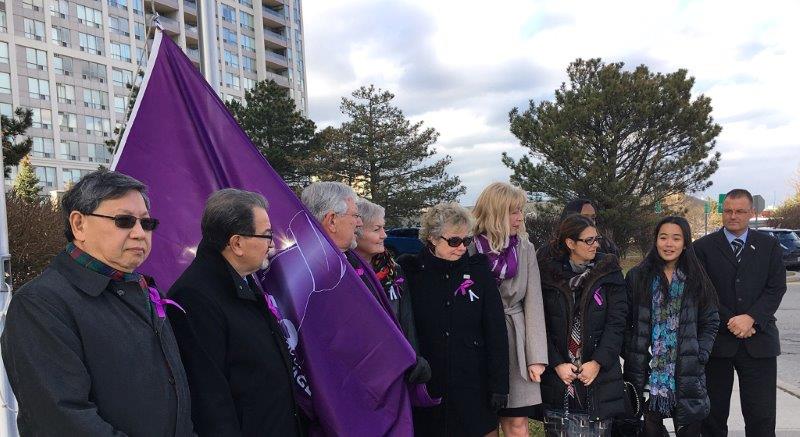 I have had the honour of working with Yellow Brick House Women’s Shelter in various capacities over the past decade. During this time I have learned a great deal about the significant impact that Violence Against Women has on victims, their children, and our community. In Richmond Hill Yellow Brick House and Sandgate Women’s Shelter do important work in this field supporting victims and their children by providing emergency housing, outreach and education. I continue to support and applaud the important work that both of these organizations provide.
I moved a Council motion proclaiming December 6 as National Day of Remembrance and Action to End Violence to Women in Richmond Hill. As a part of marking this occasion Richmond Hill raised a flag in honour of this day. I challenge my fellow men to let your voices be heard for our mothers, sisters, daughters, nieces and aunts. We all need to take a stand to stop violence against women!
9. Alexander Mackenzie High School Arts Program presents Beauty and the Beast 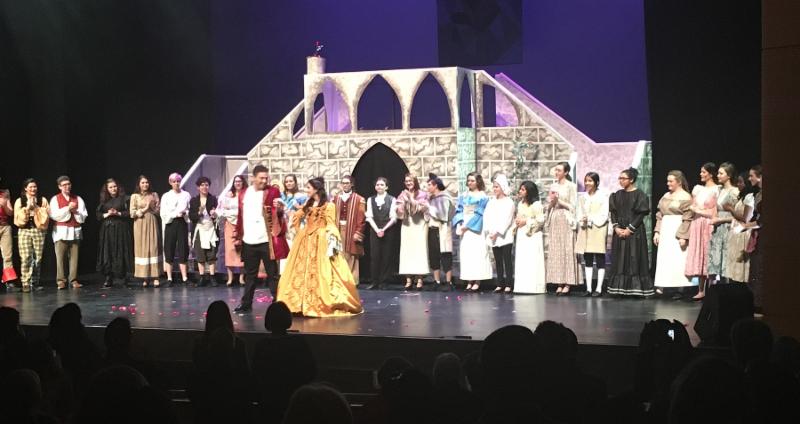 A “Standing Ovation” for an outstanding performance of Beauty and The Beast by Alexander Mackenzie High School’s Arts Mackenzie students. Congratulations to the students and faculty for an excellent performance including wonderful acting, singing, set design, music, and staging.
10. Toy Mountain in Richmond Hill

Again this year CTV provided a live broadcast of the Salvation Army’s Toy Mountain Initiative. This broadcast was hosted at Fire Station 8-6 in Richmond Hill. Many individuals and corporations generously donated toys that will be be distributed to children in our community by the Salvation Army. I also had the honour of attending a Salvation Army Donation Kettle this past month. Thanks to all that came out to donate, and thanks also to Sobey’s at Tower Hill and Yonge for hosting me.

With Russ Horner from the Salvation Army. Thanks to Joanne Witt for the photo.

11. Cannabis Legalization – Feedback to the Ontario Government
Council was recently asked to provide feedback on concerns that we have, as a municipality, related to the expected July 2018 legalization of Cannabis. A number of municipalities and the Association of Ontario Municipalities, The Federation of Canadian Municipalities, the Region of York and the York Region Police have also been asked for feedback, and have submitted their comments to the Provincial and Federal governments.
The general message from all of these municipal representatives centres around a number of questions and concerns that have yet to be addressed by both the Federal and Provincial governments, and the very short time frame left to address these concerns. Generally, the questions centre around the extra costs that municipalities like ours will bear, and the uncertainty about how much of these costs will be funded by Cannabis tax revenue collected by the Province and the Federal government.
Concerns have also been expressed by Richmond Hill and others about expected legislated authority needed to appropriately deal with enforcement issues that will arise once legalization occurs and around issues related to the appropriate siting of Cannabis stores in Richmond Hill. For more information related to this issue, you can view the Richmond Hill staff report by clicking here, or a good summary of the issue from the Liberal newspaper can be accessed here.
As I communicated at Council, while most people are quite aware that the legalization of Cannabis will eventually occur, it is imperative that communities like ours will be fully equipped to appropriately respond to any related issues and enforcement needs.
12. Richmond Hill Philharmonic – Holiday Letters Concert

Another beautiful Richmond Hill Philharmonic Orchestra Performance took place this month called Holiday Letters. All the favourites songs were performed including a tribute to the Trans Siberian Orchestra, the Nutcracker Suite, and a very funny rendition of 12 Days of Christmas. Also included was a beautiful orchestra interpretation of Steven Page’s (formerly of the Barenaked Ladies) Hanukkah Blessings. Mr. Page himself was in attendance. Thanks to the conductor Jessica Kun,, assistant conductor Kevin Brohman, Creative Director Cathy Clarke, all the orchestra members, and my fellow RHPO Board Members for 10 years of bringing beautiful music to our community! For more info visit rhpo.ca
13. Al Nadwa Educational Islamic Centre Community Dinner 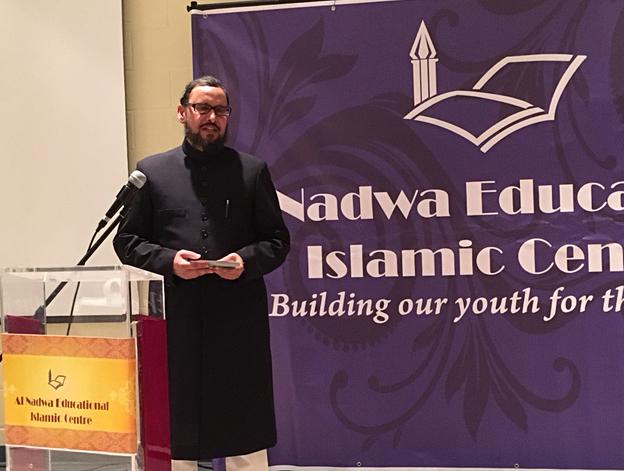 Thank you to the Al Nadwa Educational Islamic Centre for inviting council members to the annual community dinner. As a part of the program, it was great to hear from our Chief of Police, Eric Joliffe, about community safety and outreach initiatives taking place in our community.
According to Chief Joliffe, York Region is one of the safest and most inclusive communities in Canada. This accomplishment has a good deal to do with the efforts of many groups, including YRP and Al Nadwa. 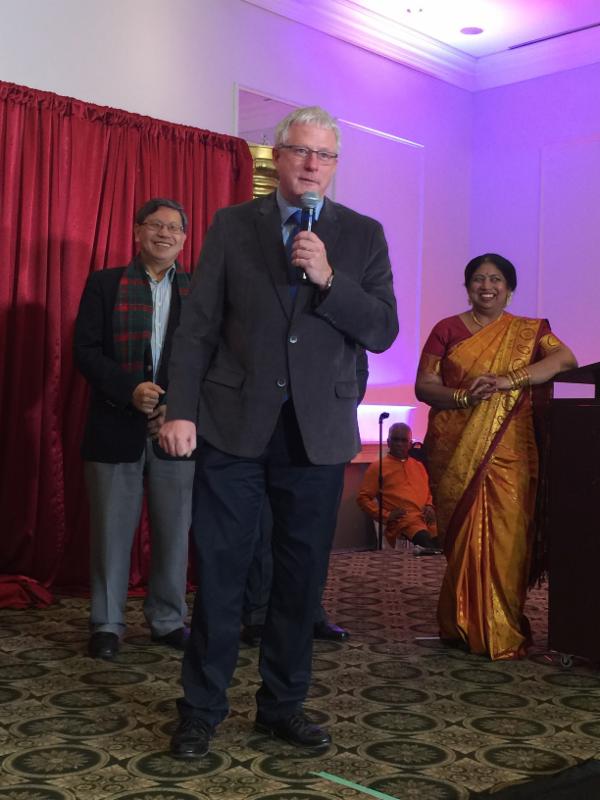 The provincial government has passed Bill 139, Building Better Communities and Conserving Watersheds Act which will overhaul the province’s land use appeals system. This act is intended to give communities like Richmond Hill a stronger voice when land use planning decisions are appealed by applicants. Once the act is in force, a new Local Planning Appeal Tribunal (LPAT) will be appointed by the provincial government to replace the current Ontario Municipal Board (OMB). The new LPAT will eliminate “de novo” hearings and will create an appeal system that gives more weight to local municipal plans. Details of this important change can be found by clicking here.
The elimination of the OMB is a very important step which will help to give more control over how we grow as a community in the coming years. I am particularly proud of the leadership that Richmond Hill has played in lobbying for these changes. After a motion that I introduced in February of 2015 was passed (to read more click here) by Richmond Hill Council, a number of other municipalities joined together and worked as a group to press for change. In the spring of 2015 a Municipal Leader Summit was arranged by our group, and recommendations were submitted to the provincial government expressing our concerns and suggestions for changes (to read the summit report click here). It would appear that, as a result of this work and the work of many others over the years, much needed change is about to happen.
16. Chanukah on Ice in Richmond Hill 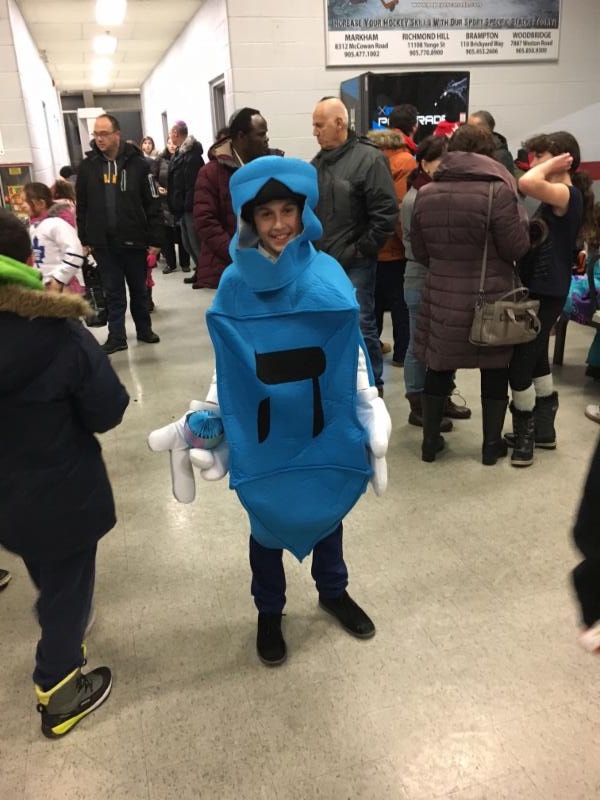 We celebrated Chanukah on Ice in Richmond Hill this past weekend. Thanks to Richmond Hill Event staff in partnership with Chabad Romano and Rabbi Bernstein. There were lots of energetic young people and a Menorah made of donuts – thank goodness there was skating after the Menorah lighting to burn off all the energy! 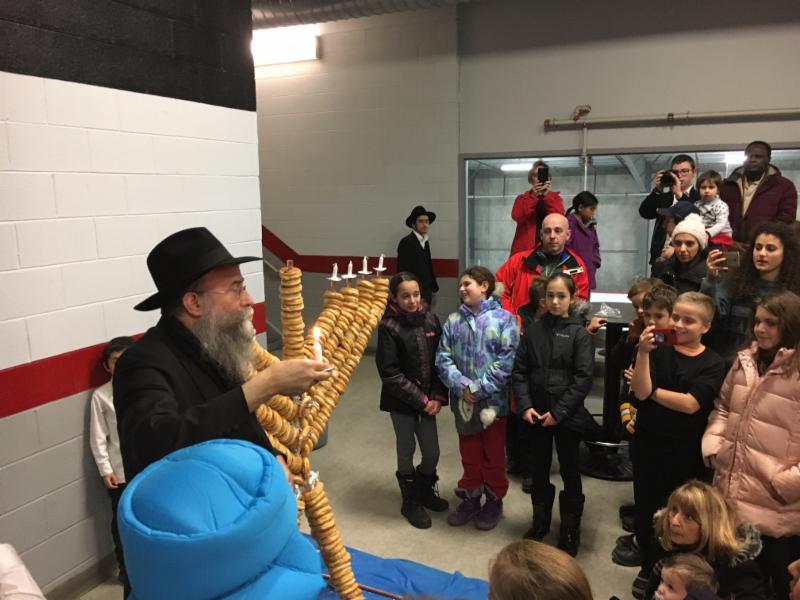 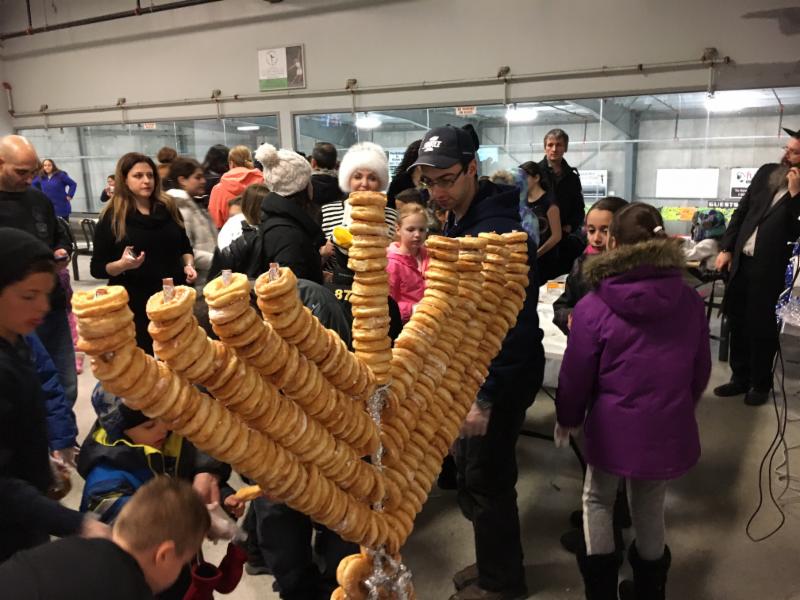 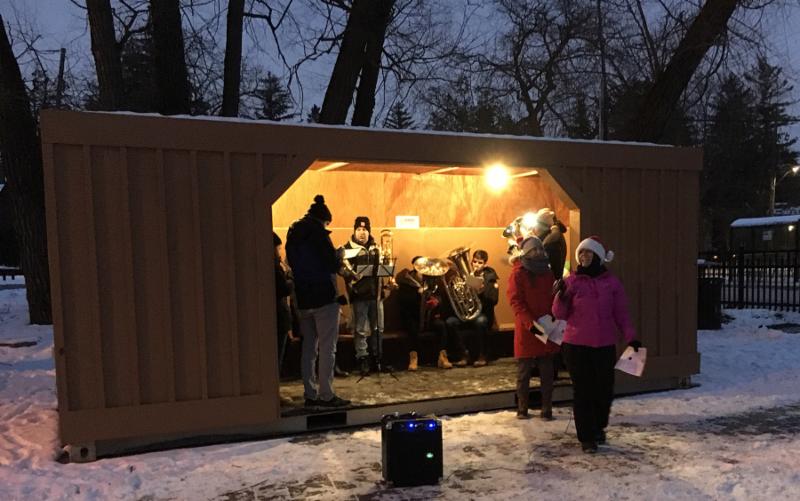 Thanks to the Salvation Army for organizing and hosting a Christmas Carol Singing at the Mill Pond again this year. It was a chilly but beautiful event to mark the Christmas season for all who participated.