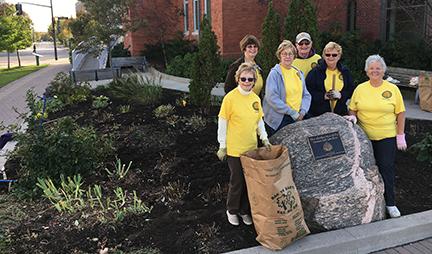 Have you ever noticed the beautiful garden at the north west corner of the Richmond Hill Centre for the Performing Arts, near Wright Street? This masterpiece garden, that so many of us enjoy each summer, is the work of the Richmond Hill Horticultural Society. They do a great job on this garden and also the Millennium Garden at the Mill Pond as well. I was driving by the other day and this group of volunteers was hard at work putting the garden to bed for the winter. Thanks very much to the “Hort” volunteers for all you do beautifying our community!
2. The Honourable Elizabeth Dowdeswell,  Lieutenant Governor of Ontario Visits Richmond Hill

Council and a number of community leaders were honoured to welcome her Honour Elizabeth Dowdeswell, Lieutenant Governor of Ontario to Richmond Hill. We discussed Technology and Innovation with prominent Richmond Hill businesses – Cosmo Music, Hibar Systems Ltd., MobileLive, Mackenzie Health Innovation Institute, and Visual Defence.
We also talked about Environmental Sustainability in our community with our Environment Staff and Mill Pond Splash Committee member and owner of onrichmondhill.com, Marj Andre, as well as York Region Environmental Alliance president Gloria Marsh. After listening to the delegations, when asked by the media about her “impressions of Richmond Hill”, her honour Elizabeth Dowdeswell said she was impressed with the “positive spirit about our path forward” in Richmond Hill.
3. Richmond Hill to Eliminate Vacant Unit Rebate Program
Council endorsed the elimination of the Vacant Unit Rebate program. The program, which was introduced by the Province of Ontario in 2001, provided a tax rebate to property owners of commercial and industrial buildings which were vacant for more than 90 days consecutively. The costs of providing the rebate were distributed between the three municipal taxing bodies (Richmond Hill, York Region and the Province re: education). After consultation with other municipalities and the business community/public, it was recommended that the program be eliminated for several reasons one of which is that the program is an exclusive benefit to the commercial and industrial property class and is significantly funded by the residential property class. Several other options were considered including phasing out of the program over several years, a reduction of the rebate amount, as well as funding realignment, increasing evidentiary requirements and retaining the status quo. It is expected that the savings for the Town due to the elimination of the program will be about $107,000 in 2018. The final decision falls to the authority of Regional Council. Their decision applies to the nine local municipalities and is expected in November. If approved, elimination of the program is expected to take effect January 1, 2018. Applications for 2017 vacancies would be considered until the end of February 2018.
4.  Plans for Programming at the David Dunlap Observatory Underway 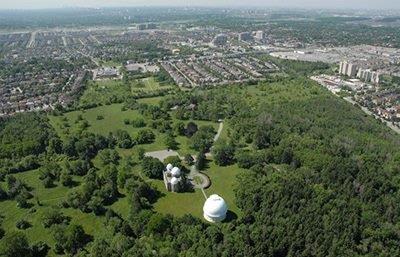 Plans are in the works for the delivery of educational and public outreach programming at the David Dunlap Observatory (DDO). After a thorough review of the submissions received in response to an invitation for Expression of Interest and as approved by Council, Richmond Hill staff will proceed with negotiations with the Royal Astronomical Society of Canada and David Dunlap Observatory Defenders for astronomical programming at the property, Western University for summer science camp programming and the Ylab Group for the implementation of an adult Maker Space and Educational program.
The Town will manage and maintain the property. This fits in with the DDO Park Master Plan that will soon transform the area into a 110-acre destination park in the GTA. The building and surrounding property have heritage significance and it has always been the Town’s intention to protect it, as well as keep it available for public use. This is a much anticipated and popular destination for star gazers in Richmond Hill and beyond. It is envisioned that the Observatory will become a regional centre for education and public outreach related to astronomical research.
For a Liberal newspaper article related to this subject click here. To learn more about the longer term plans for the DDO Park click here.
5. Dining out at Alexander Mackenzie High School… 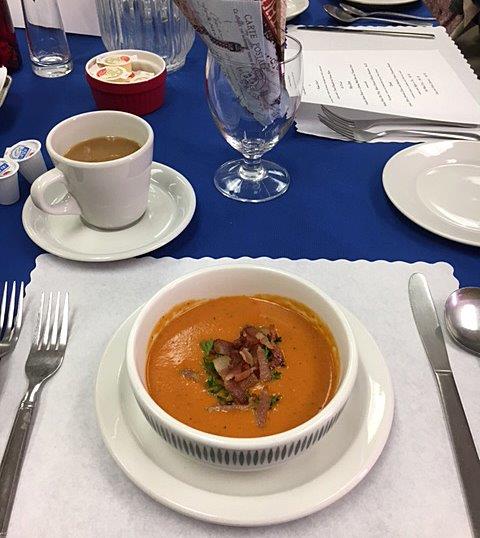 You are likely looking at these photos and thinking “David went for lunch at a fine French Restaurant”  Well you are mistaken – I was recently invited to experience the excellent culinary creations from the Alexander Mackenzie High School Culinary Arts students.
The meal was delicious, and another example of the creative and interesting high school programs that we have available in our community. Thanks to Vice Chair, York Region District School Board Corrie McBain for inviting Mayor Barrow and I to experience this “deliciousness!” 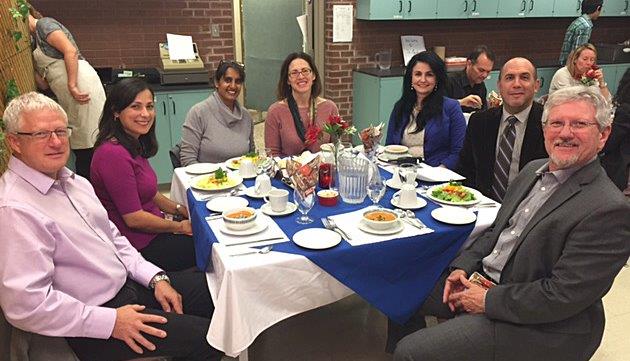 6.  17 Amazing Restaurants You Need To Eat At In Richmond Hill 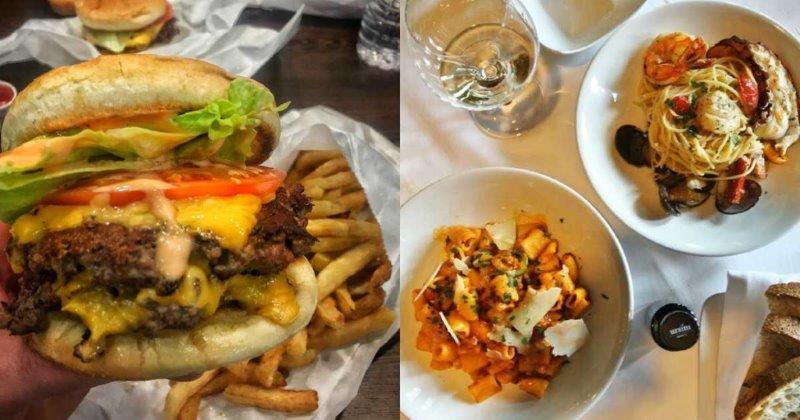 This is a great article promoting some of the excellent restaurants in our Town. A number of these restaurants are also located in our Historic Village Core and all are definitely worth a visit. I would also suggest that like any “best of list” we also have a number of other great places to eat in our Town that are not on this particular list. Click here to read the article.
7. Richmond Hill Concert Band and Richmond Hill Historical Society – Canada 150 through Music and Story Telling “Notes and Quotes” – October 22 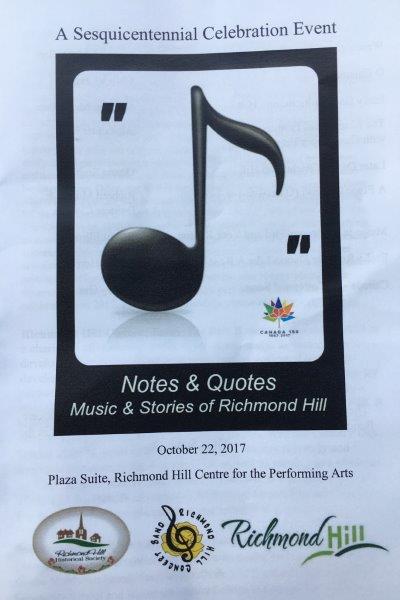 I attended a fascinating lecture delivered by former Toronto Mayor John Sewell entitled Designing a Good Community to Live In – a very relevant topic for Richmond Hill. I came away realizing that many of the concepts he presented are captured in Richmond Hill’s Official Plan which will guide our own community’s growth in the future.
9. Ontario Chinese Artists Association Exhibition at Richmond Green – October 28 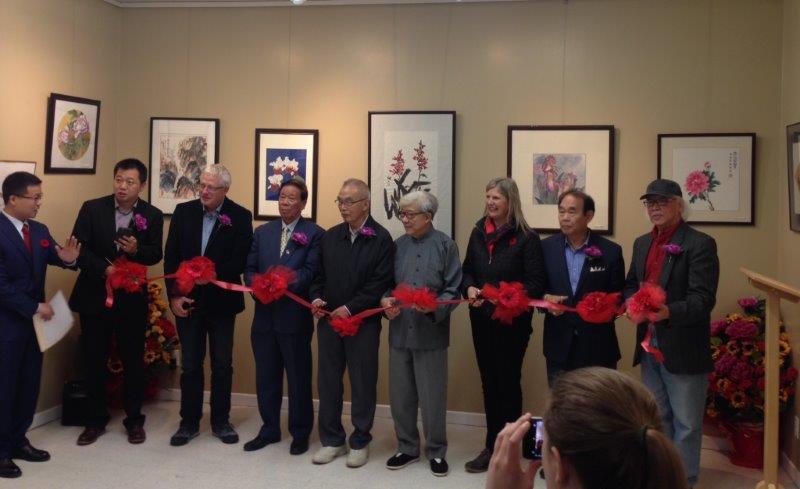 For the first time ever, the Ontario Chinese Artists Association displayed an exhibit of their work at the Boynton House, in Richmond Hill. I shared the pleasure and honour of welcoming them to Richmond Hill with Ward 3 Councillor Castro Liu.
The OCAA group includes artists from all across the GTA, both young and old. A wide variety of traditional Chinese artwork was on display for our community to enjoy. To learn more about this group visit www.ocaa.info/wp/.
10. Burr House Spinner & Weavers Guild
Th 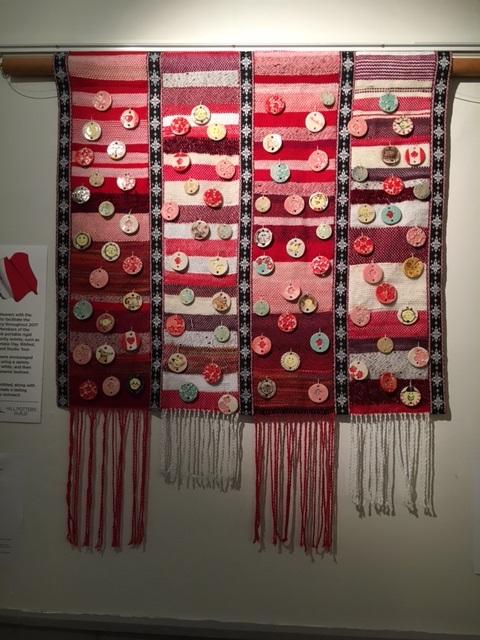 e Burr House Spinners and Weavers along with the Hill Potters’ Guild, collaborated to facilitate the creation of a community tapestry to commemorate Canada 150. Members of the Spinners and Weavers Guild took portable looms to various community events, such as Doors Open, Park Openings, Canada Day, Ribfest, Tastes of the Hill, Culture Days and the Studio Tour.  People of all ages and cultures were encouraged to weave a section of the loom, using a variety of materials in Canada’s red and white, and then sign one of the hundreds of ceramic buttons created by the potters.
The final product, along with a variety of other beautiful artwork is on display as a part of the Fire and Fibre exhibit at the Burr house Friday to Sunday, November 3 – Sunday, December 17 from 12:30 until 4:30. I really enjoyed the exhibit and would encourage everyone to go and take a look – art and culture is alive and well in Richmond Hill! For more visit  informationburrhousefibrearts.com 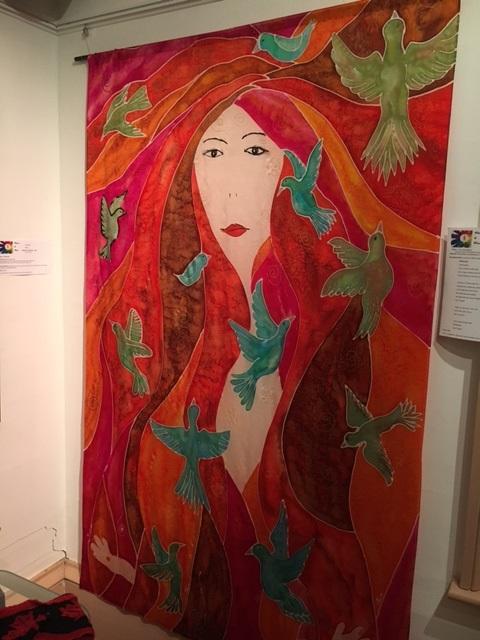 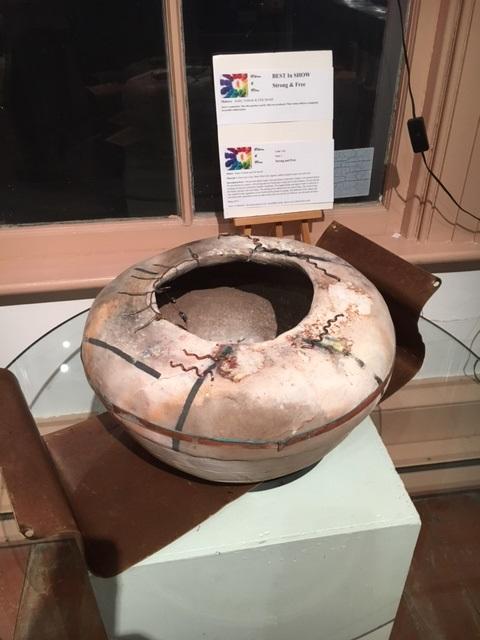 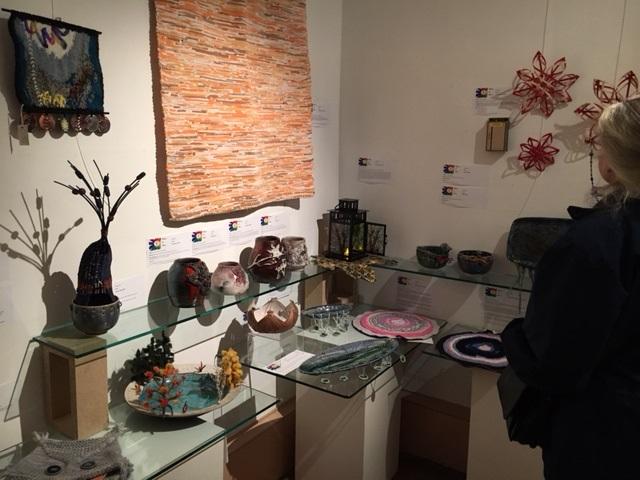 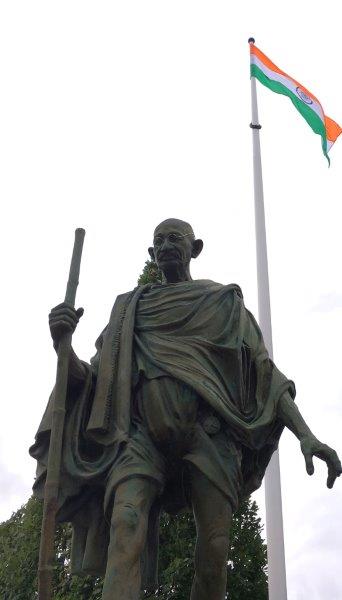 In celebration of the newly proclaimed Hindu Heritage Month, Richmond Hill’s Vishnu Mandir Temple hosted a celebration of Hindu culture for our community to enjoy. Thanks for the invitation to share in some delicious food, good friends, and conversations with members of our community. If you have not already visited the Vishnu Mandir Temple I would encourage you to do so. The grounds are beautiful and full of beautiful artistic monuments. In addition, the Museum of Indian Civilization, located on the grounds, is well worth the visit.
For more information visit https://vishnumandir.com.

Richmond Hill remembered our many heroes and veterans on Sunday, November 5th, despite the rain, at our annual Remembrance Day parade and ceremony at the Richmond Hill Cenotaph. We remember the sacrifices made by those that came before us to protect the foundation upon which our community is built. We live in a great country – to achieve lasting and true greatness comes a commitment that we will remember and honour the sacrifices and lessons from the past. Lest we forget … 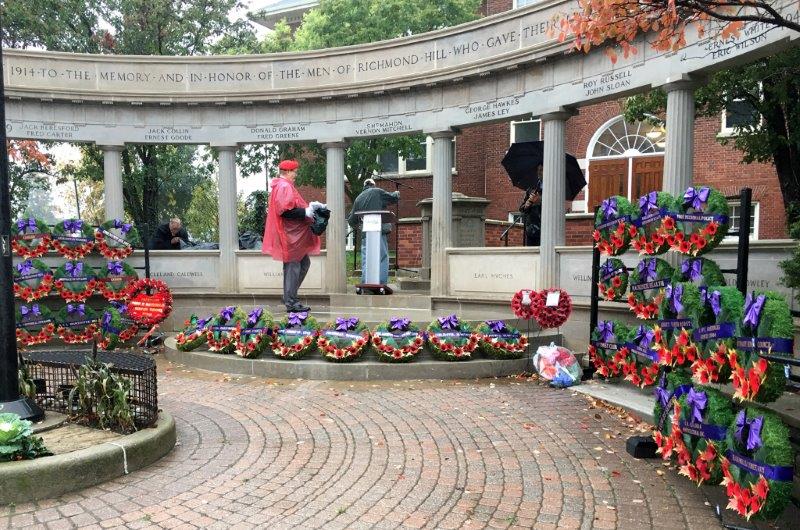 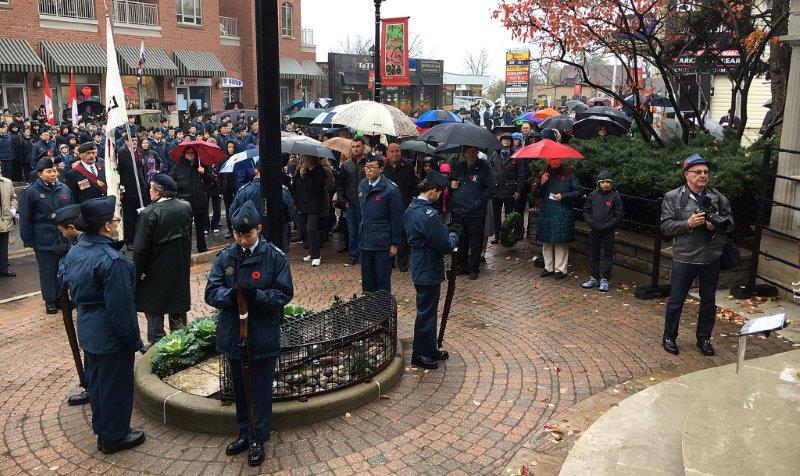 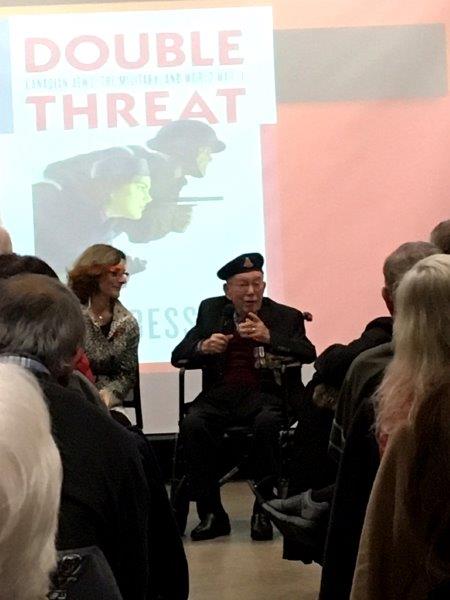 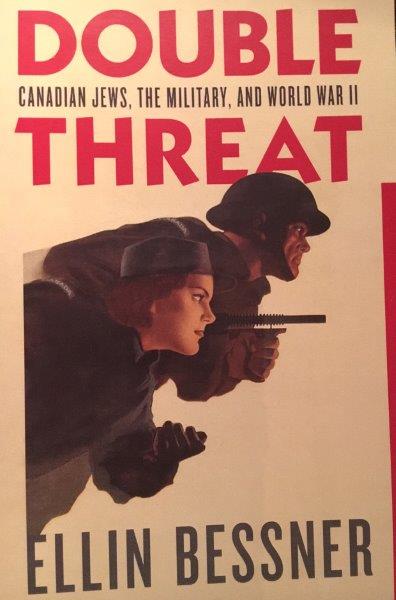 As a part of our Remembrance Day events in Richmond Hill, our Public Library hosted a book talk by Ward 4 resident, and author Ellin Bessner. She spoke about her book, Double Threat. This book outlines the experience of Jewish Veterans during the second World War. It was a fascinating and moving talk that included remarks from a 94 year old Jewish Veteran, Mr. Chud. From the liner notes in this book – “As PM Mackenzie King wrote in 1947, Jewish servicemen faced a “Double Threat” – they were not only fighting against Fascism, but Jewish survival.” For more information please visit https://ellinbessner.com/ 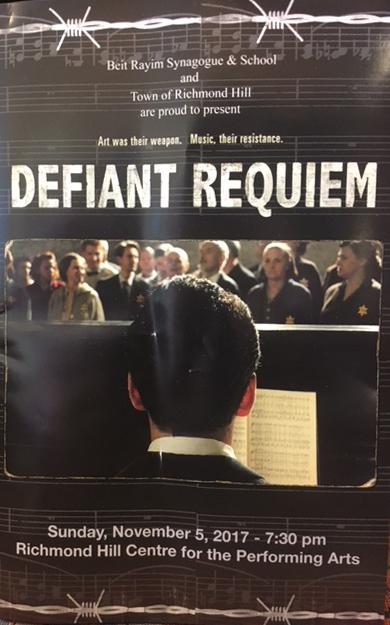 For the 9th year Richmond Hill partnered with Beit Rayim Synagogue and the Sarah and Chaim Neuberger Holocaust Education Centre, to host a relevant presentation during Holocaust Education Week. This year we were treated to a fascinating film documentary called Defiant Requiem. Murry Sidlin, the film’s producer, recounts the story of how Rafael Schächter, a talented Czech-Jewish musician deported to Theresienstadt, worked to lead a performance of Verdi’s Requiem inside the camp. For the 150 concentration camp inmates who performed the Requiem 16 times between 1943 and 1944, music was an act of spiritual resistance to the degradation thrust upon them by the Nazis.
15. SEED of Victory Gala & Building Community in Richmond Hill 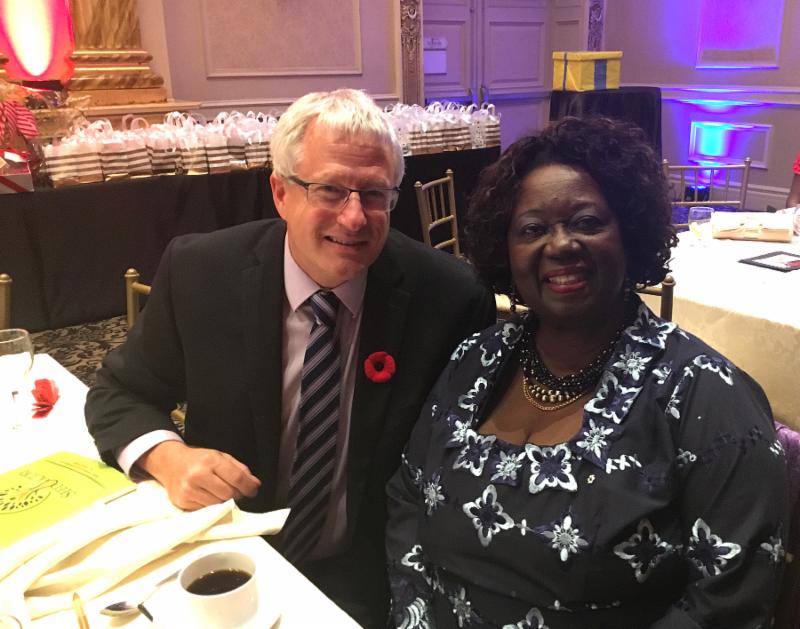 I had the honour of sharing the podium with Dr.
Jean Augustine at a talk during the 1st Annual SEED of Victory Gala. My speech was related to building a strong community in Richmond Hill. Dr. Augustine just celebrated her 80th birthday, and while she is retired as a Federal MP, she is clearly continuing her work to build our communities. It was great to hear her wise words on the subject of community, philanthropy, and international development. Given her long and storied career as a public servant I told her I felt a little like the Opening Band for the Rolling Stones!